The Rich Got Richer, The Poor Got Poorer: The Mansions And Shantytowns Of The NFL Before It Discovered League Parity

The Cleveland Rams played several games at the so-called neutral site of the Akron Rubber Bowl, including the 1941 season opener against the Steelers and this 1942 exhibition game against the Giants. With the ball is the Rams’ Gaylon Smith, later to join the Cleveland Browns.

Today we take it as a given: A professional sports team will play an even number of games at home and on the road across the course of a regular season.

Not so the National Football League in the 1930s and 1940s. This was an era in which there were distinct winners and losers both on the field and at the box office and when actions by the league office had a way of widening the divide.

END_OF_DOCUMENT_TOKEN_TO_BE_REPLACED

Cleveland Rams: From Nonentities to NFL Champions in Only Twenty Months 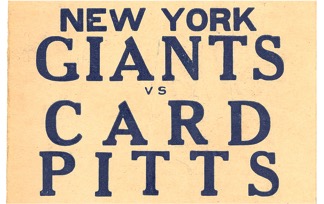 The Cleve-Pitts? The winless 1944 merger of the Chicago Cardinals and the Pittsburgh Steelers into a team known as the “Card-Pitts” (and unofficially as the “Carpets”) instead would have been a Rams-Steelers hybrid if not for the vehement opposition of Cleveland general manager Chile Walsh.

It was the spring of 1944, just weeks before the Allied invasion of Normandy and the liberation of Europe, and the Cleveland Rams franchise felt set upon by the “open animosity” of the rest of the National Football League. Discontinuing play for the 1943 season due to the war had been a mistake, Rams owner Daniel F. Reeves admitted, and he wanted back in for 1944. The other NFL owners acceded but, by the Rams’ accounts, seemed intent on making the Rams pay for their one-year lapse in operation.

Their severity would provoke the Rams into a nearly manic quest for survival and success.